The Paper Clip [An Encouraging Word]

I confess, I probably love paper clips a little too much.

I am that guy who will throw away a whole stack of papers but remove the paper clips first so I can reuse them. I carry two of them on my keychain and others in my car. I’ve used them for clipping papers, of course, but also for picking toy handcuff locks (when I was younger), for resetting any number of little electronic devices, and even for cleaning under my fingernails. 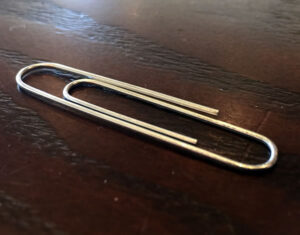 That’s one reason I noticed it the moment I sat down at the long, dark brown wooden table at Starbucks: a jumbo silver paper clip, abandoned and unused by a previous guest. It had curves in all the right places, and boy did it shine.

I wondered why on earth someone would leave a perfectly good paper clip behind. Why not take it with them? Why not use it again? Why the waste?

I started to ponder what its use had been before I found it. School assignments? Job applications? Legal documents?

Then I had this thought: even though I didn’t know WHAT its purpose had been, I knew THAT it had a purpose once and could have one again in the right hands.

Even though someone else hadn’t considered it worth bringing along, that paper clip still had usefulness left in it, still had value, still had potential if someone was willing to give it a shot.

Just like the people in the coffee shop that day.

When the Bible teaches that, “God created man in His own image; He created him in the image of God; He created them male and female…” (Genesis 1:27), it isn’t just making a theological point. It’s revealing a personal promise.

If you’re human, then it doesn’t matter what other people have said about you or done to you; GOD says you have value and potential and worth just because you’re you.

If you’re human, then whether you’ve been lifted up or trampled down by this life, GOD says you can have power and purpose and hope in Him!

I picked up that paperclip because I saw there was still life left in it.

May you look to Jesus today and let Him pick you up, because He knows that wherever you’ve been, and whatever you’ve been through, there’s still life left in you.

PrevPreviousPrepare the Way (Luke 3:4b)
NextTwo Perspectives on Pull-ups in the Pool [An Encouraging Word]Next

This site uses Akismet to reduce spam. Learn how your comment data is processed.

Get regular inspiration, strategy and growth tips sent straight to your inbox.